E-Cigs…. Not a “Safe Alternative” to Smoking 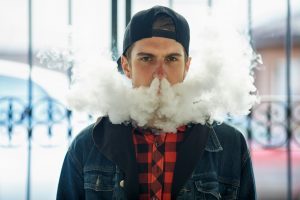 Dr. Stephanie Crise and Dr. Jessica Downs of Smiles Hollywood Orthodontics, the top McKinney orthodontics providers around, are not only committed to the health of their patient’s teeth that they straighten with all types of braces, but they are equally committed to the overall health of their patients. Because many of their orthodontic patients are teens and preteens, the topic of vaping has become of particular concern to them.

E-cigarettes were introduced to the American market in 2007 and in the last few years, popularity has ramped up exponentially! People picked up e-cigs, or vapes, thinking they were safer than smoking traditional cigarettes. Nothing could be further from the truth, especially for young people.
A young person’s brain is still developing up to about the age of 25 and since most e-cigs do contain nicotine, the developing brain is susceptible to many issues with nicotine exposure. Nicotine addiction is an obvious consequence, but also mood disorders, impulse control, attention and learning deficits, seizures and other neurological problems. Long-term effects include respiratory problems, stroke, heart attack, reproductive issues and low birth weight in babies born to women who smoked while pregnant.
When youth make new memories or learn new skills, the brain forms a connection. Addiction is a form of learning which makes nicotine addiction much easier in young people than adults. So many other addictions can stem from the seemingly innocuous addiction to e-cigs and regular cigarettes. Choosing to not smoke either of these can at least be a step in the right direction to keep other addictions at bay.
Many believe that the aerosol in e-cigarettes is just harmless “water vapor.” But the aerosol inhaled and exhaled can contain nicotine, ultrafine particles that can be inhaled into the lungs, a chemical called diacetyl used in flavoring which can cause serious lung disease, cancer-causing chemicals and heavy metals such as nickel, tin, chromium and lead. Flavorings that may be considered safe in food are not safe for the lungs because the stomach can process substances that the lungs cannot.
E-cig aerosols can also contain formaldehyde, acrolein, and acetaldehyde which is also found in traditional cigarette smoke.

Sadly for the top McKinney orthodontics providers, for the past 5 years, the most commonly used tobacco product of youth in middle school and high school was e-cigs. This is concerning. “The addiction to nicotine and later conversion to (or dual use with) regular cigarettes are the greatest concerns,” says Roy S. Herbst, MD, Yale Medicine’s chief of medical oncology at Yale Cancer Center. What most people may not know is that e-cigarettes are made by some of the same companies who make traditional cigarettes so the vaping ends up just being a gateway to buying and smoking regular cigarettes when they children are older.
For youth still in school, participating in sports is so often very important to students. The irritation and damage to the lungs can in a very real way affect a student’s performance in these sports. The financial cost of vaping can also be challenging for young people when the costs are viewed honestly.
The facts are clear and supported by those who know. For only the fourth time in his term as Surgeon General, Dr. Jerome Adams issued a rare advisory on December 18, 2018: “I am officially declaring e-cigarette use (vaping) among youth an epidemic in the United States.”
ABC News reported on an 18 year old young woman named Simah Herman who experienced the side effects of vaping and is now an advocate against vaping. She was vaping a nicotine cartridge every day. When the nicotine content of a single vaping cartridge is compared to traditional cigarettes, it was about the same as smoking an entire pack of cigarettes a day.
Simah reflected on her time spent vaping. “I didn’t think of myself as a smoker. Like, it’s just a different kind of smoke,” she said. “The vaping just makes it seem like nothing. Like you’re doing nothing wrong.”
This previously-healthy girl was in the hospital for a week, initially on a ventilator and then a medically-induced coma because of the damage to her lungs from vaping. Simah was a talented dancer when she first started vaping but her dancing skills suffered the longer she vaped.
She has recovered and has a message for those who want to “just try it”. Simah says she once wanted to try it just once too, but then “I tried it another time and then another time.”
If all that isn’t enough food for thought, the e-cigarette device itself can be dangerous. Batteries in the device are used to heat the coil which turns the liquid to vapor. The batteries can come in contact with metal objects like keys, buttons, coins, etc. and this overflow of electricity can easily cause them to explode, either in someone’s pocket, hand or mouth causing significant injury.
While once thought to be rare, these accidents have increased in number as the years go on. These incidents have caused blindness, severe burns, lost teeth and other dental problems, and even death. In a time where cameras seem to be everywhere, many of the accidents were caught on video. A simple Google search brings up photos and videos of these accidents that are so frightening you would think even the possibility of this happening would be enough to discourage vaping.

For anyone who is already vaping, you CAN stop. It may take weeks or months but the result of a healthier body is worth it. Just like with any habit that you want to quit, developing a plan is key:

Vaping is a habit that can be eliminated for the betterment of overall health.